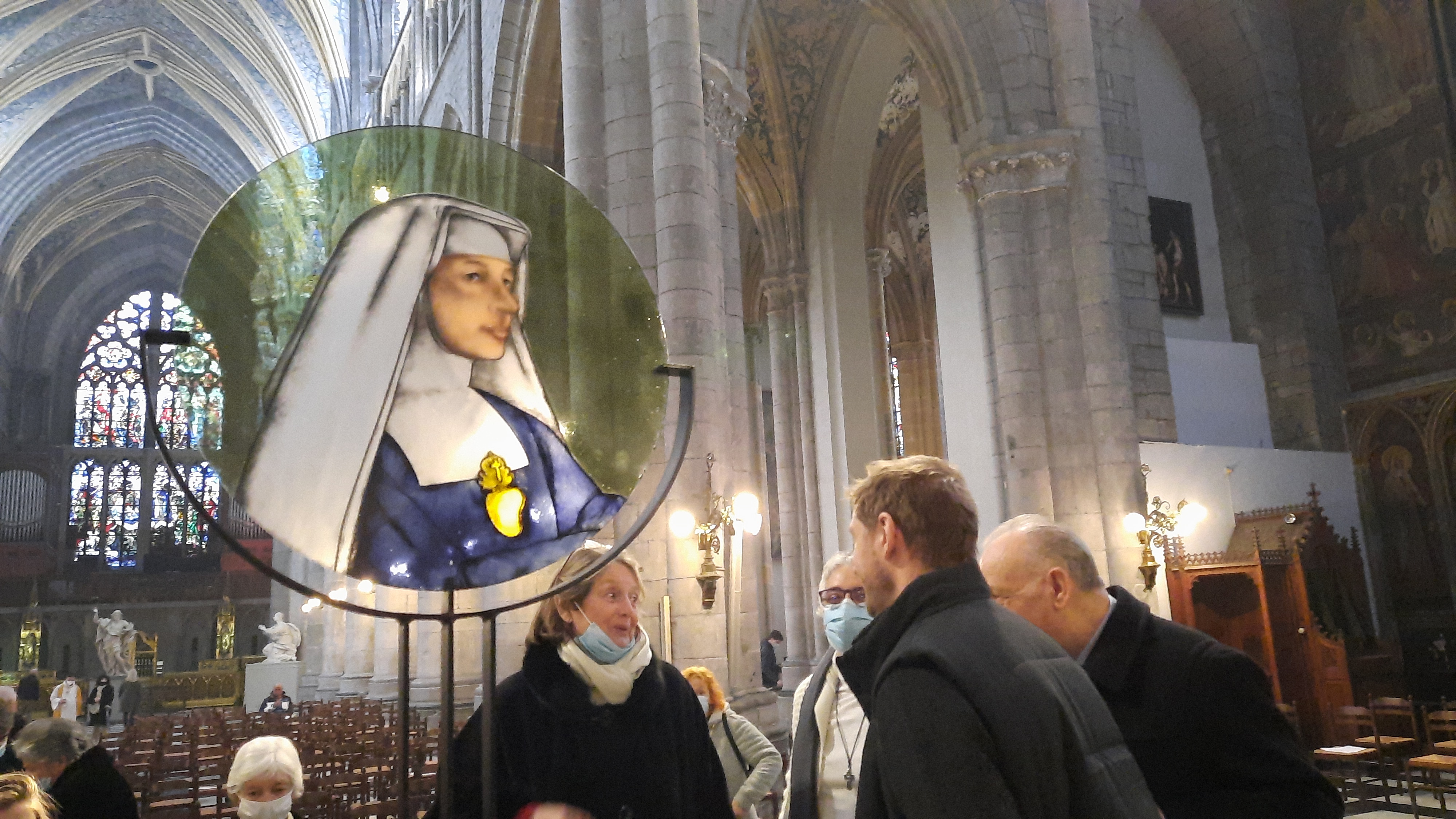 We share this beautiful experience that we lived last Sunday in the homeland of our beloved Emilia, in LIEGE - Belgium.

Aurora Torres Hernández, our Superior General, tells us about it this way: "Last Sunday, 20 February, the Bishop of Liège, Monsignor Jean-Pierre Delville, celebrated the Eucharist in the Cathedral of Liège, to honour our Foundress on the 25th anniversary of her beatification. It was a real blessing for me... During the Eucharist, I felt the presence of our Foundress, she took the initiative to continue to encourage us to live our mission in the Church and in the world. You were all very present in a special way in my heart"

« Love your enemies, do good to those who hate you ! » (Lk 6,27-31) This sentence of Jesus has remained famous, because it goes far beyond the usual logic within our world. Society is indeed built on competitiveness and the law of the strongest. But competition inevitably leads to opposition to the other, perceived as a competitor. The Gospel wants to eliminate the logic of the enemy, which underlies all violence and war, at its root. It invites us to love our enemies and to do good to those who hate us.

This is what Blessed Marie de Jésus, whose maiden name was Émilie d'Oultremont, wanted to live. She was born in Soumagne at the castle of Wégimont in 1818. She died in Florence on 22 February 1878 and was beatified in 1997 by Pope John Paul II. Her liturgical feast is therefore celebrated on 22 February. We are anticipating it on the preceding Sunday and, on this 25th anniversary of the beatification of Mary of Jesus, we are going to bless the stained-glass that has been created in her honour in this cathedral. Why was she beatified? Because she lived an intense relationship with Christ and wanted to bring his work of salvation to life for humanity.

Emilie d'Oultremont was a mother and wife of Baron d'Hooghvorst. Together with her husband, she accompanied her father when he was appointed Belgian ambassador to the Holy See in 1838, after he had been one of the three members of the provisional government of Belgium at the time of the country's independence in 1830. In Rome, Emilie discovered the meaning of the universal Church. It was there that her husband died of malaria in 1847. The young widow returned home and felt an inner call to unite herself to the saving work of Christ, who was repairing the reigning evil in the world, and to put herself into the role of the Virgin Mary, who was associated with this repair. It is a sensitivity to the collective sin that plagues the world and a willingness to oppose it through prayer and support for those who are suffering.

With this in mind, she moved to Paris in 1854 with her children and founded the Marie Réparatrice Society in 1855. Her two daughters followed her in this initiative. She was strongly inspired by Saint Ignatius of Loyola and the Society of Jesus. This is how Emilie took the name "Mary of Jesus" as a nun. In 1860, a house was founded in India and two others soon followed. Others were founded in Toulouse, Reunion, London, Tournai and Rome, where the body of the Blessed is kept and where the sisters gave us a relic of her. In 1866, a house was founded in Liège, where Bishop Theodore of Montpellier was happy to welcome the community of his cousin Emilie, whom he had seen leave in 1854, to his great despair. She had told him that she preferred to obey Christ rather than the bishop! The congregation moved to rue Eugène Ysaye in Liège; at the end of the 20th century, it moved to rue du Méry.

The congregation is now present all over the world and we are privileged to welcome Sr Aurora Torres Hernandez, Superior General, and several of her sisters, as well as many members of the Oultremont and Hooghvorst families, to this celebration. The Sisters of Mary

Reparatrix serve all over the world; as Blessed Mary of Jesus said: "Wherever Christ is misunderstood, even outraged, in his suffering and humiliated members, there is room for Reparation".

Indeed, as Jesus says in today's Gospel: "Be merciful, as your Father is merciful". And he adds the following profoundly wise rule: "Whatever you want men to do to you, do also to them". This is the secret of the world that Jesus proposes to us: a world that is less violent and less frustrating than the one we are used to living in. Let us thank the sisters of Mary Reparatrix for taking this mission of repairing the world seriously. We are united with them in prayer and we want to follow them in this way of salvation! Amen! Alleluia!